EFSA published a comprehensive overview of all the procedures they currently employ to assess dietary exposure to different chemical substances.

Risk assessment is central to the work carried out by the European Food Safety Authority (EFSA). A key component of risk assessment in food is exposure assessment, and in December of last year EFSA published a comprehensive overview of all the procedures they currently employ to assess dietary exposure to different chemical substances. There is a staggering variety of different chemicals that can exist in food, such as additives, flavourings, pesticides, contaminants from packaging to name a few, and EFSA is charged with regulating them all. So how do they do it? How do they assess if consumers are exposed to safe levels of different chemicals in food?

There are a number of ways of determining the concentration of a chemical in different foods, and the method used is often determined by the type of chemical. Pesticide concentration data usually comes from experimental data, and/or from routine monitoring and surveillance programs. For example, residue levels are often determined by simply measuring the concentration of a pesticide in a range of food commodities. Several types of the same commodity are often measured several times in order to assess the variability of the concentration within that commodity. In the absence of this data, conservative exposure assessments can be performed with Maximum Permitted Levels (MPLs) or Maximum Residue Limits (MRLs). For chemicals deliberately added to food at known levels, like additives and flavourings, the use levels can be provided directly by industry. Other chemicals, like food packaging migrants, are more difficult to measure and can be estimated from mathematical modelling of the migration, which is actually described in the European Plastics Directive 2002/72/EC. Finally, the data can come from a Total Diet Study (TDS). This is where commonly consumed is collected and analysed at a retail level, so provided the study is representative enough a TDS can be considered the most accurate way of determining chemical concentration for use in a exposure assessment. EFSA uses all of these sources in various ways for different dietary exposure assessments.

Food consumption data usually comes in the form of a national consumption survey, or can be approximated from food production statistics. The latter is basically information on how much food is produced for human consumption within a household or country, from which a per capita estimate of food consumption can estimated. However, this isn’t always very accurate and doesn’t always give a breakdown of consumption by different demographics. On the other hand, national food consumption surveys are more representative surveys of food consumption patterns of consumers in the different countries in the EU, and are considered a much more accurate way of assessing exposure. EFSA has 22 national diets for assessing long-term or chronic exposure, and have 19 national diets for assessing short-term or acute exposure. EFSA has used these diets to publish the Comprehensive European Food Consumption Database, which can be used for detailed exposure calculations. The  Comprehensive Database currently includes food consumption data concerning infants, toddlers, children, adolescents, adults, elderly and very elderly from a total of 32 different dietary surveys carried out in 22 different Member States.

So how does EFSA combine the dietary surveys? Well that’s where a suitable food classification system comes in handy. Once the food consumption and chemical concentration data are in the same coding system, the sources of information can be combined. There are many national and international food classification systems available, and deciding which one to is best to use is very much dependant on application. Currently, there are activities underway to build a harmonised pan-European food consumption database, under the guise of the EU Menu Project.

EFSA generally performs its assessments in a tiered or stepwise manner. This means that they usually start with a simple and overly conservative calculation as a screening method to see if there is an issue with a particular chemical or chemicals. The result is then compared some sort of toxicological end-point, such as an Acceptable Daily Intake (ADI) or Tolerable Daily Intake (TDI). If the result exceeds one of these values, more refined methods are used. At their most accurate, the full distribution of dietary exposure is assessed. To do this, probabilistic assessments are used, which can assess both the variability of data as well as fill gaps in the input variables such as brand loyalty and seasonality.

In their report, EFSA goes on to describe the different methods they use in different chemical groups. The number of methods are too detailed to list here, but a couple of interesting points are worth noting. In flavourings and additives, maximum use levels are frequently used to assess exposure when actual use levels are not available. For food contact materials, a theoretical diet of 1 kg of food in contact with 6 decimetres squared of packaging is used. Neither of these methods will yield particularly accurate results, particularly the latter for packaging. Interestingly though, when submitting a safety petition no applicant has ever provided more accurate information on levels of migration into real foods. As a side note, Creme is a partner in the EU project FACET (Flavourings, Additives, and Food Contact Materials Exposure Task). The aim of the project is to deliver a food chemical surveillance system that will provide refined estimates of consumer exposure to these chemicals.

In their report, EFSA makes a number of recommendations when it comes to dietary exposure assessment. One is to always consider children, esp. toddlers, since they are often at the “high end” when calculating exposure. Gathering accurate food consumption for younger age groups can often pose a challenge though. Another key recommendation is the use of probabilistic dietary exposure assessments on a more routine basis in case refinements are needed, as probabilistic assessments are considered to be the most accurate way of assessing exposure. This is because the natural variability in all the data inputs can be simulated, rather than looking at worst case scenarios or point estimates. Also important is the consideration of cumulative exposure for all metabolically or structurally related chemical substances. This can be particularly important for chemicals like pesticides, which can have a common mechanism of toxicity, so it is crucial to estimate the combined or cumulative exposure. Finally, it is important to realise that national consumption surveys only cover a week of consumption at best. Thus, EFSA recommends that it is important to test statistical methodologies for estimation of usual intake from short term dietary data, so that long-term exposure can be more accurately estimated.

Scientific Report of EFSA: Overview of the procedures currently used at EFSA for the assessment of dietary exposure to different chemical substances – EFSA Journal 2011;9(12):2490

The Future of Packaging is our latest H2020 project: GLOPACK

The next generation of packaging should be eco-efficient in respect to its source, usage benefit and end of life. Packaging should reduce food waste and preserve food quality and safety.

“Explanations are … the currency in which we exchange beliefs.” Lombrozo, 2016 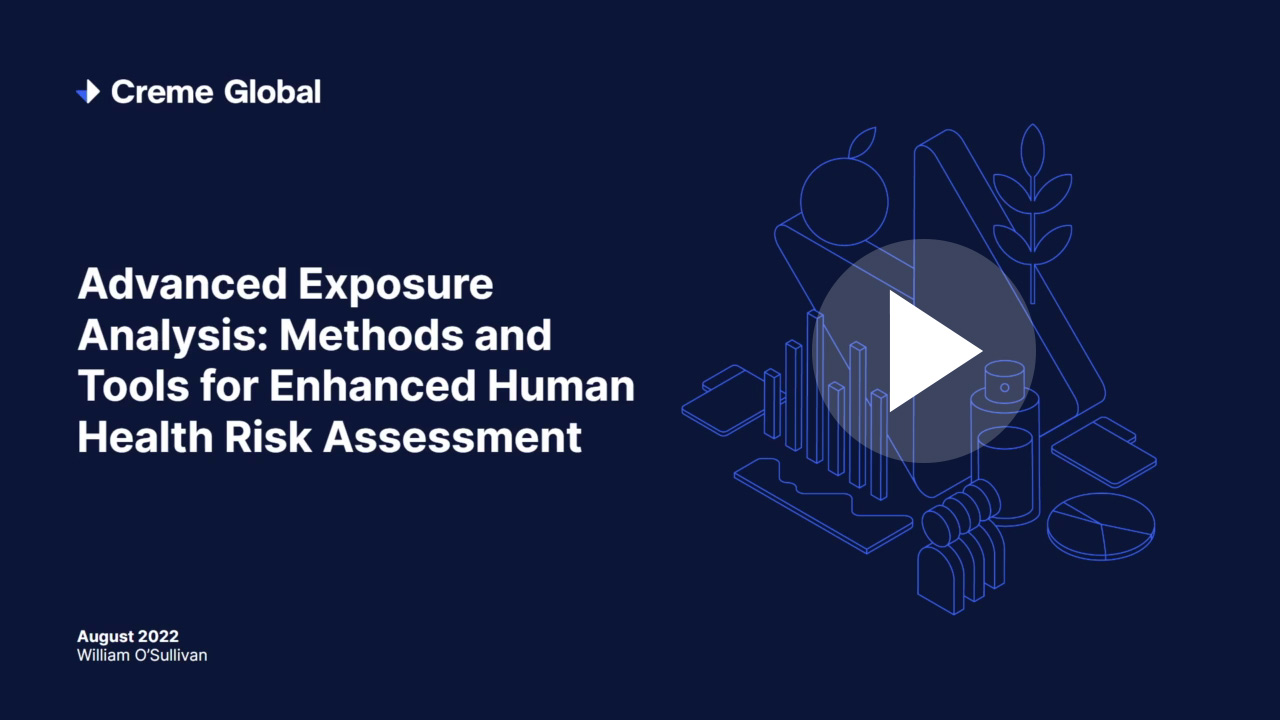 At the American Chemical Society ACS conference William O’Sullivan of Creme Global presented on the methods and tools for enhanced human health risk assessment. You can watch that talk here.