The latest consumer and innovation trends impacting the food industry.

The first in-person IFT FIRST conference in a while kicked off in Chicago this week and it was a joy to be back and meet everyone again. It was fascinating to see the latest innovations on the EXPO floor. In particular, we noticed a jump in the interest in plant-based protein. And with consumer focus on gut health and immune support, we also spotted a lot of sugar alternatives and fibre ingredients being promoted at the conference.

Data standardisation is a balance between enabling the flexibility of each stakeholder to have their own data terminology and structure and a rigid approach where one template must be used by all. The reality of implementing a data-sharing platform is typically a compromise of both. Facilitating some level of customization, while investing time and effort to align terminology. Thereby facilitating a level of flexibility for data gathering and ensuring people are using a common understanding of what the data means.

The case study that was used as part of this was a joint project with Pablo Carrión, Senior Principal Scientist at Nestle Purina discussing Nestle’s work with Creme in identifying and solving potential food safety issues in a factory environment. The video is available On Demand on the IFT site.

Should we eat more processed foods?

The conference kicked off with a provocatively titled debate Should we eat more processed foods?

Marion started the argument against processed foods, focusing on both the rise in obesity since 1980 and the food industry’s response to the need to maximize shareholder value, by creating inexpensive to produce, highly profitable, delicious foods.

While Prof. Gibney of UCD argued that additives, introduced during processing can have health benefits. He cited folic acid as an example. Scientists took folate, which isn’t easily absorbed, and created highly absorbable folic acid, which has contributed to the reduction of the incidence of spina bifida by 50%.

Some in the audience suggested that the panel may in fact be debating different topics.

Public engagement is crucial for new food technologies but where should consumers get their information?

A recurring topic across many sessions at the conference was how do we educate consumers?

Roxi Beck cautions against scientists “educating” consumers. The consumer engagement director for The Center for Food Integrity says, “you can’t jump in and say, here is my list of credentials, listen to me.”  “You need to engage consumers and learn about their concerns and values.”

There is a huge difference between food scientists’ trust in sources of information about food innovation,  and those same scientists’ assumptions of public perception:

When asking food scientists “Who do you  trust for information related to food innovation?”

The top three answers were other food scientists, food companies, and academics.

“Who do you think the public trusts for their information related to food topics? “

Scientists think the answers would be: Social media/influencers, friends, blogs/podcasts.

Hilary Thesmar, Chief Science Officer at the Food Industry Association believes consumers need to know more. “It’s important to find a balance between selling product and not scaring consumers, but also adequately educating them so they understand that certain products have inherent risks”

“Consumers expect their products to be safe. There are companies who are open about things like their controls, sanitation, and training to keep consumers safe, educating the consumer on how to limit their risk. I think we need to see more of that.”

On educating consumers: “There’s this gap in our food safety system with respect to the communication to consumers. It’s such an important step and we haven’t fully figured out this piece” agreed Stacey Popham, vice president of quality, food safety, and regulatory, Americas at Barry Callebaut.

Creme Global CEO Cronan McNamara noticed a big uptick in plant-based protein products on the IFT First Expo floor this year.  “The trick” says Cronan” “will be ensuring texture and taste is right for consumers”.

Innova Market Insights presented their latest consumer research at IFT which revealed more plant-based ingredients being explored. They chart a 46% growth in food and beverage launches this past year

One of the many plant-based products on show at the IFTFirst Expo.

Despite the rise of the Ketogenic Diet (keto), a low-carb, high-fat diet used for weight loss, and a general acceptance of fat, “When it comes to the average consumer, 21% say ‘low-fat’ is an important attribute, up from 16% in 2016,” noted Mintel associate director of food science Stephanie Mattucci.

“Use of coconut oil in plant-based meat and dairy substitutes is on the rise and is now exceeding sunflower seed oil in new product launches growth”  added Dasha Shor, associate director of food and drink at Mintel.

“What we’re learning is that younger generations are much more open to foods made in a whole new way (i.e. cell-cultured meat),” says Andrew Noyes of @goodmeat.

During the panel Bill Marker of Marler Clark – the Food Safety Law Firm, was asked what has changed in the last 30 years since he started as a Food Safety Advocate?

“Jack in the Box had a massive E. coli outbreak that saw 700 people sick, 4 dead, and 16 people with acute kidney failure,” he said. “…What eventually came of that was a positive – the FDA declaring an E. coli O157:H7 outbreak and the industry really stepping up and working together to solve it.”

“The number of E. coli cases we see linked to hamburgers now is now nearly zero. “

“Food is inherently unsafe; it’s a manufacturer’s job to make food safe, so we have a huge responsibility, and there are many layers in place to ensure that safety,” added Stacey Popham, Stacey Popham, VP of Quality and Food Safety at the Barry Callebaut Group.

“Know your suppliers.” Stacy continued. “A third-party audit or certification or documentation is not enough to identify potential high-risk ingredients. You need to be boots on the ground, in the factories verifying the quality management system.” “Low risk does not mean no risk. For example, soy lecithin has historically been thought of as a low-risk ingredient but has had multiple issues in the past few months. We have to be always vigilant and watching out for potential hazards.”

Hilary Thesmar of FMI added “The foods that are healthiest for us are also great vectors for bacterial growth because they have so many nutrients. We have to put our efforts on things like farm prevention programs to mitigate things like fresh fruits coming in with pathogens.”

How Food Development Is Responding to Inflation and Supply Chain Challenges

A very well-attended panel discussion at IFTFirst discussed the soaring inflation, continued supply chain challenges, and geopolitics that have impacted food product development. The panel of CPG, ingredient, and startup companies revealed how they are responding to these challenges with creativity, innovation, and science.

On the topic of inflation and supply chain, is it better to be a big company or an upstart?

“I think we’re seeing significant sales going to the smaller companies. Consumers are becoming more comfortable with the newcomers who don’t have a legacy brand, including the negative connotations that legacy brands are facing. Something we’re seeing with new CPG companies is that their competitive advantage is that they are new and they can appeal to and react quickly to today’s consumer.

The large company has the advantage of size and being the preferred buyer for suppliers. Smaller brands are much more responsive to the consumer.

20 years ago, we didn’t have social networks. The smaller companies are capitalizing on having these built-in, responsive communities.”

Was the baby formula debacle a massive one-off issue or is there something the rest of the industry can learn from this?

The panel agreed that there should be more resiliency in our food system to avoid this type of thing.

What trends does the panel see in the industry?

Do you see companies skimping on quality checks in favour of conserving profits?

“No. There is no company I know of doing this. The risk is far too high.”

A challenge for food scientists is, how can we replicate the taste that we crave, but in space, millions of miles away?

Space is the perfect place to innovate our food, proposes moderator Dorit Donoviel, PhD. Dorit is an Associate Professor at Baylor College of Medicine. Executive Director at Translational Research Institute for Space Health (TRISH). “A lot of the innovations for space travel laid the groundwork for things like MREs. Because there’s such a dire need to keep people in space fed for long periods of time”.

The first challenge is developing food that has a five- to seven-year shelf life. But as astronaut Scott Parazynski points out “how can we replicate the taste that we crave, but in space, millions of miles away?”

“Three years on a Mars mission requires over 12,000 kilos, or 26,000 lbs, of food, 17% of which is packaging waste. “ Mindblowing numbers from Michele Perchonok, retired from NASA Space Food Systems Lab. This needs to last for a three-year mission. Innovative solutions to packaging are needed.

“We recognize that the food system is not one thing, it’s many things, and it will have to be a variety of foods for the crew. So we crowdsourced ideas from the public around safety, nutrition, etc. The competitors and teams keep their IP, so what they develop is then able to benefit other space programs or potentially, Earth.”

Scott added his insight from his missions to space, “Our international partners bring food from their countries. The best chefs in France prepared amazing meals, we had Japanese curry, and a colleague from Spain brought wonderful ham and cheeses. It’s a lot of preparation, and it gets shared by the crew on an international basis. We’d turn on some music and look down at the Earth below. “

“The food lab in Houston has a diverse population and has developed meals including Thai, Chinese, vegetarian, Mexican foods, foods with a lot of spice and a lot of diversity in flavours” added Dr. Perchonok

“Astronauts miss crunchy salads, pizza, juicy steaks. “ with added agreement from astronaut Scott Parazynski “We’re exploring how 3D printing could create the crust, then the tomatoes, then the cheese, then the toppings, for Chicago deep dish pizza in space!”

“The food system overall should be something that enables our astronauts to thrive, not just survive.”

A really interesting food innovation was spotted by @AM_Grantham on the expo floor.

Reduce commercial cook times by ~25% compared to wheat-based breadings because of increased protein and fat.

And this allows for cutting perishable milk and/or egg-based dips.

It is a multi-win on climate, health, clean label, and cost fronts”

Download the ultimate guide to AI in the food industry

Find out why is AI now forming an integral part of the food industry revolution? How can it work for you and is it here to stay? Download our free guide from Creme Global’s experts. 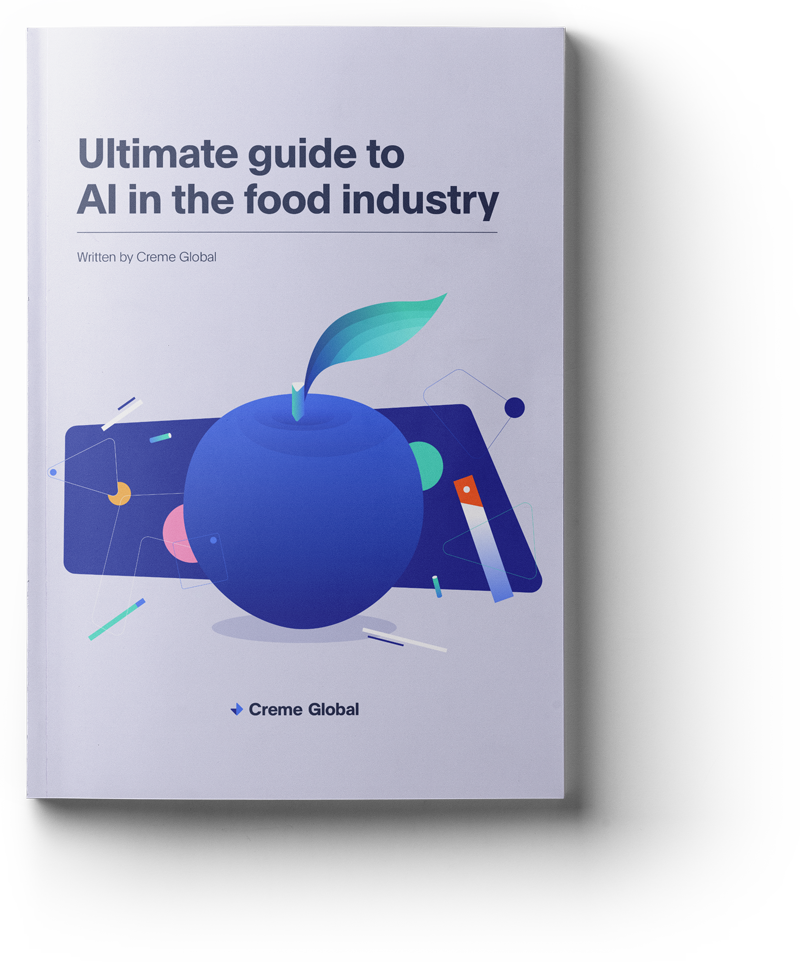 Learn more about our solutions and services for food manufacturing, safety and nutrition.

Microbes are ubiquitous in nature. Their prevalence and spread – even with sanitisation procedures – is evident in food production environments. But what about condensation? Could this be just as big an enemy?

Creme Global has always been at the cutting edge of data science and computing since its formation in 2005. With the increasing number of businesses across a wide range of industries requiring AI/ML to stay at the cutting edge, we have formed a dedicated AI/ML steering group.

Creme Global has joined with Dawn Farm Foods and University College Dublin’s digital development hub, CeADAR, on a €3M Industrial Research Project to change the landscape of food innovation forever. As part of this, they have secured co-funding from the highly prestigious Disruptive Technologies Innovation Fund by the Irish Government.