This cross-sectional study is based on dietary intake data of 33,504 subjects obtained from the Brazilian National Dietary Survey. All tuber containing foods were identified, and the contribution of different tubers to overall tuber consumption in Brazil was quantified. Descriptive analyses assessed the impact of macroregion and sociodemographic characteristics on tuber consumption, and differences in intake were assessed using statistical tests. Lastly, the dietary intakes of tuber consumers and non-consumers were compared after adjusting for energy and covariates to determine if there were any major differences in dietary intakes between the two groups.

Fifty-five percent of the Brazilian population consumed tubers, which differed by macroregion. The intake of tubers among consumers also differed between macroregions. Overall, rural areas reported significantly higher mean daily intakes of tubers (122 g/day) among tuber consumers than urban areas (95 g/day). Mandioca and potato were the most commonly consumed tubers (59 and 43% prevalence, respectively, on any of the 2 days), while the highest daily intakes amongst tuber consumers across Brazil were noted for sweet potato (156 g/day) and potato (95 g/day). On a macroregion level, among tuber consumers, mandioca had the highest prevalence of consumption in the North (94%), Northeast (83%), and Central-West (68%), while consumption of potatoes was most prevalent in the Southeast (63%) and South (62%). Compared to women, small but significantly higher tuber intakes were noted for males (108 vs. 85 g/day). There were no significant differences in intakes among income quintiles. After adjusting for energy and other covariates, nutrient intakes between tuber and non-tuber consumers were not meaningfully different, with the exception of sodium (+ 6.0% comparing non-tuber to tuber consumers), iron (+ 6.1%), zinc (+ 5.7%), vitamin C (+ 8.3%), riboflavin (+ 9.0%), and folate (+ 7.9%).

Tuber consumption is influenced by regional and sociodemographic characteristics of the Brazilian population. When looking at energy-adjusted nutrient intakes, diets of tuber consumers have resulted in somewhat lower intakes of some micronutrients, namely riboflavin, folate, vitamin C, iron, sodium, and zinc. 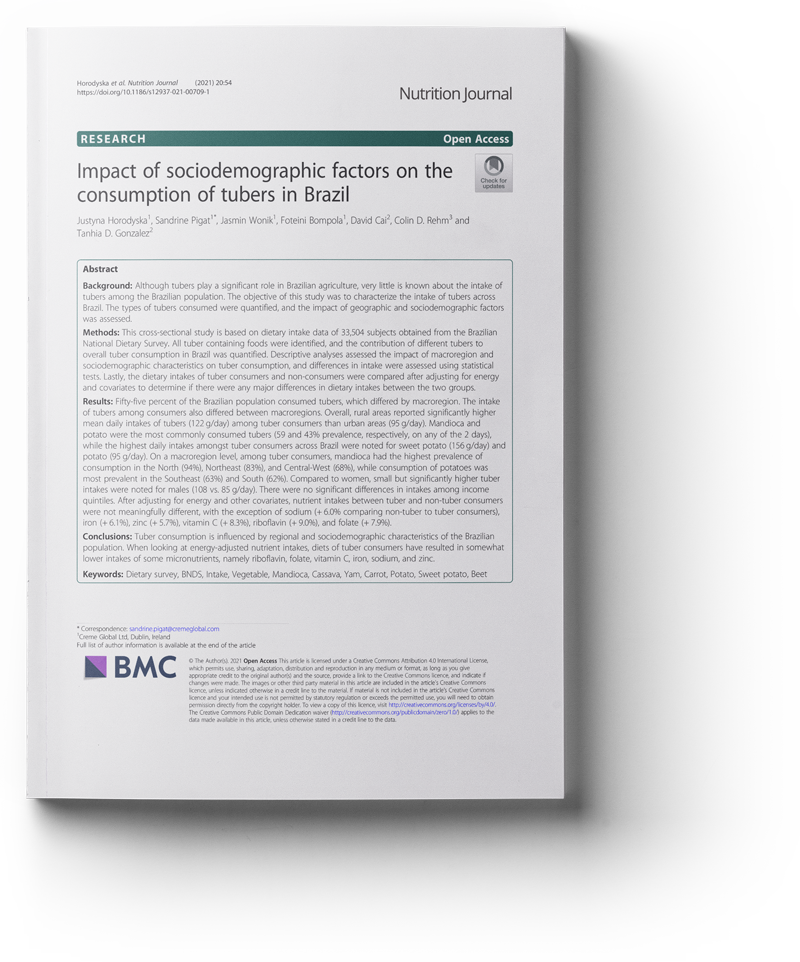 Learn more about our solutions and services for food manufacturing, safety and nutrition.